Stand up Comedy in English 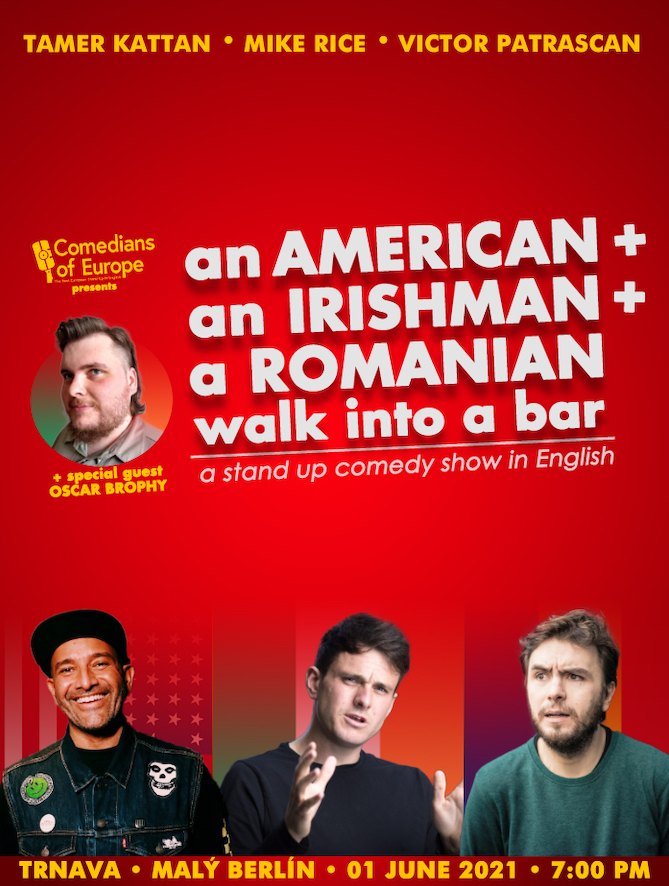 What do an American, an Irishman and a Romanian have in common? They are all coming to Trnava and want to tell you some jokes! They are 3 friends who love to tell jokes and funny stories from their life! This show is not for the easily offended. It’s comedy at its best, 3 comedians who are unapologetically honest, woke and hilarious! featuring special guest Oscar Brophy.

The show will be held entirely in English, will be held indoors and will follow the current social distancing guidelines. Therefore, we are only able to have a limited number of tickets. Please purchase your tickets in advance.

tamerkattan.com
@TamerKattan
Tamer began his comedy career in Los Angeles and New York, but very quickly began to tour internationally. His over-seas experiences include tours for the troops in Afghanistan, performing at the American University in Cairo (during the Egyptian revolution) and the Edinburgh fringe in Scotland, where he received three 4 star reviews from international press. He was most recently featured on Seth Rogen’s Hilarity for Charity event with Todd Glass and Hannibal Buress, won the 2015 World Series of Comedy, in 2017 won his episode of Comedy Knockout on truTV, 2019 won “Best of Fest” at Big Pine Comedy Festival & 3 weeks later won The Portland Comedy Festival. He has TV & Radio credits on BBC and SkyTV in the UK as well as in the U.S. on Fox, HULU, Netflix, Amazon & truTV.

Mike Rice
mikericecomedy.com
@mikericecomedy
Michael began stand up comedy in Chicago, where within two years he was working regularly at the most prestigious clubs in the city, including The Laugh Factory. He has since returned home because his mother made him, and has been quickly rising in the Irish and European scene, playing regularly in major clubs in Dublin and London. where he he won the King Gong at the Comedy Store in September, and is going to be performing stand up on Irish national television in December.

Victor Patrascan
victorpatrascan.com
@VictorPatrascan
Victor Pãtrãşcan is a pretentious stand up comedian and outrageous social commentator who lives in London, but who was made in Romania. Victor has told jokes in English in front of a crowd of people in the UK, Germany, Netherlands, Austria, Sweden, Denmark, Switzerland, Finland, Spain, Ireland, Portugal, the Czech Republic, Slovakia, Slovenia, Croatia and Romania. In 2020, for a second year in a row, Victor has topped the rankings of Roast Battle London Premier League.

Oscar Brophy
@laszlopanaflax
Oscar Brophy produces comedy shows in English in Bratislava because he’s a masochist. He’s been published in the Irish Times and was unfollowed by Barack Obama on Twitter.